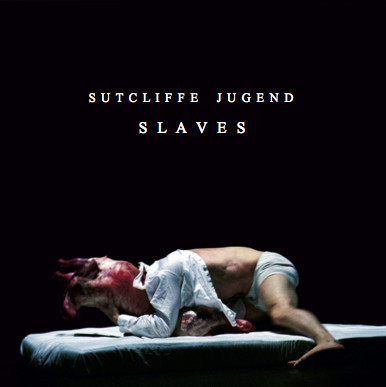 These past few years have been a busy hive of activity for Sutcliffe Jugend with the release of some really intriguing albums and captivating live aktions. It was during this period that saw the band develop and progress into a more mature sound and style. Through the creative implementation of complex structures and new sound elements, they have evolved into genre defying styles, while still not losing elements of the old PE strain of harshness of sound and lyrics. It was also during this period that S L A V E S was conceptualised, developed and slowly realised. From 2012, this album was already in the making. It was only after numerous edits and re-workings that this 6 CD album was finally deemed complete and good to go for final production and eventual release.

S L A V E S consists of 6 parts defined by ‘Theatres’. These 6 separate but highly relevant chapters put the entire album into the context of an abstract dance performance ‘THEM’ displayed at the Centre Pompidou, Paris in 2012. Each disc contains uniquely different themes that revolve around distinctive sound environments with varying ambience. With occasional and minimal overdubs over the entire 56 tracks, the complex sound layers are arranged such that they weave in and out of the subconscious, narrating closely the fluid movements of the dancers.

Overall, this release ‘was conceived with the intent of capturing very different elements of the Sutcliffe Jugend sound, grouped both conceptually and stylistically.’ S L A V E S was intended to remind us about how we are all passive slaves to our slowly evolving tastes, and ultimately doomed to fail in our struggle with life and ultimately death. Enjoy.