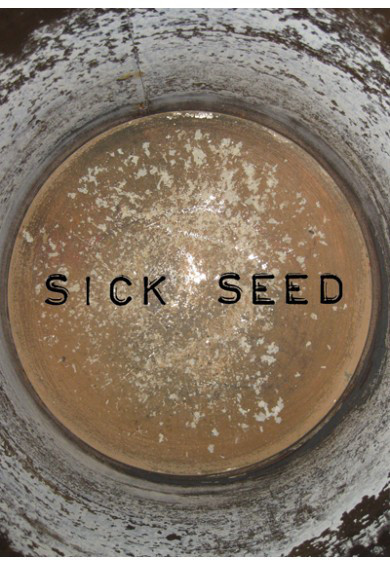 Sick Seed has also long history on Freak Animal. On this particular release, Sick Seed has abandoned most of it’s common elements. No vocals, no musical loops, no traditional usage of instruments. Instead, three tracks of ugly and broken industrial-waste. Each song is still clearly conscious creation, where all distinctive elements of rugged sonic waste is layered in a way that all tracks sound vastly different. Perfect addition to Sick Seed’s diverse and unique discography!

Sick Seed: “I don’t remember everything about recording sessions and ideas thrown around at the time of putting the tracks together, but I do remember that in the main recording session where the core material was done, lots of objects of various materials got broken and one band member was combing shards of glass from his beard when he got home afterwards.

It was premeditated to use broken, rotten, damaged, distorted (not as in distortion pedal) and even glitchy sounds. Sound was made to fit the releases secondary theme of damage, destruction and failure, all both physical and mental. Also field recordings of very mundane everyday routines, or rituals, if you like, were used (in very much destroyed final form).

In addition to destruction, etc. it’s main theme is failure in performing rituals, whether everyday routines, social conventions, or Magickal workings, and damage of different kinds resulting in these failures.

I don’t have any specific feelings about 3″CD. I guess it’s somewhat similar to 7″ or 10″ vinyl but never got really popular. Its small size can be a downside as well. I once took some CDs to a used record store and there was one 3″ among them and the guy said he won’t take it as “it’ll just get lost because it’s so small.” I suppose it’s good format for special packaging, but I’m not a big fan of that nowadays.”