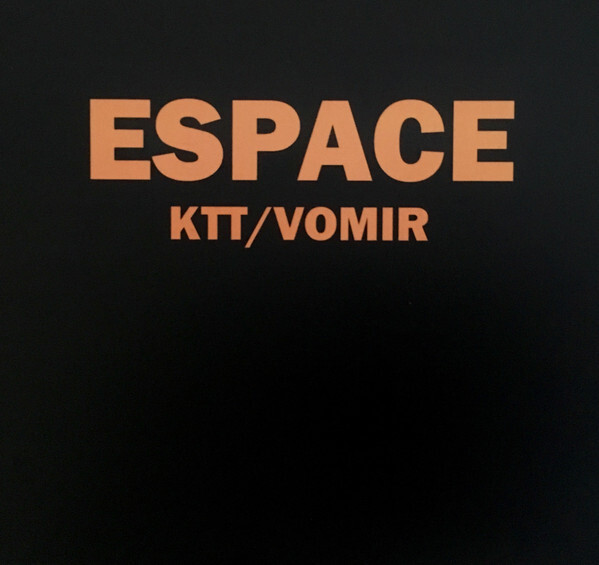 
Espace is a recent collaboration between two of Paris experimental sound denizens. KTT (aka Kasper T. Toeplitz) is polish born sound artists known mostly for his creation of BassComputer- an electric bass with 5 fretted strings and 4 unfretted strings, which is interfaced into a computer. And Vomir( aka Romain Perrot) one of the most widely known creators of the HNW form. This three track CD release sees the pair blending their sounds together to create a hellishly dense-yet- unsettling sonic form that sits somewhere between searing & subtle shifting industrial-tinged drone matter, and soul crushing HNW.
The CD comes in a fairly sparse looking mini gatefold- which features blocky orange texts against a plain black backdrop- it’s a joint release between four underground noise labels, and it comes in an edition of 300 copies- so hopefully you’ll still be able to hook a copy.

Each of the three tracks falls between eleven & nearing nineteen-minute runtime, so you have an album full runtime of forty-three minutes. All three tracks are self-titled- the first track is dense, yet decidedly mood blending of constantly rushing & roasting low-to-mid ranged wall wash, and these roaming & worming tones- that move from searing & sustained whistle, onto grinding-to-rumbling bass oscillations. The track feels like its slow sliding or cruelly slicing into its self, to creating a vibe that’s both hellishly thick, yet subtle unbalancing.

The second track is the longest here at just shy of the twenty-minute mark- it open with a slowed & pained blend of buzzing lows & ear slicing highs. Fairly soon we get the relatively pared back addition of a feasting & slightly churning industrialized static texturing. I’m not normally a fan of more pronounced higher pitches in my noise, but here the highs really work well to creating this feeling of woozy un-balancement, though this element does still become a little trying, especially when played back on headphones.

Lastly, of course, we have the third & finally track- and here we find a blend of slowly descending aircraft like bass drone, thin hissing grain, and distant churn-bound & industrial like wall rush. As the track progress we get this most effective swirling & swimming grain churn occurring, and this creates this almost dizzying sonic feel.

As a long-time fan of Vomir’s work, it’s always nice to see the (sometimes) black bag wearing sonic nihilist step away from his normally dense, crude, and overloading HNW sound. And for the most part I must say Espace is a worthy & enjoyble experiment between the pair- bringing together often searing & brain pressing unease with feasting dense-ness. (Roger Batty, Musique Machine)